Prevent the spread of plant diseases

Below is information about some plant diseases affecting native vegetation in the Sydney region. People who manage weeds in bushland reserves and on their properties need to be able to recognise if these diseases are present and what can be done to minimise the risks of further spread.

What is it? Myrtle Rust is a plant fungal disease first detected on a property on the New South Wales Central Coast in 2010. So far it has been identified taxonomically as Puccinia psidii sensu stricto, a member of the eucalyptus/guava rust complex of plant rust diseases which affects plants in the Myrtaceae family including several types of flowering Eucalypts, paper-barks and plants common in forests, along riparian zones and in dry and other rainforest ecosystems. So far 107 host species in 30 genera have been known to be affected. 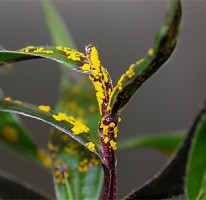 What does it look like? Myrtle Rust causes spots on leaves and stems of susceptible plants. These spots develop masses of orange to yellow powdery spores. The disease most often affects young shoots and the growing tips of plants causing leaves to become curled and distorted.

What are its effects on plants and ecosystems? Myrtle Rust kills new growth in infected plants and can spread to all susceptible plants within an ecosystem. Creatures dependent on plants of the Myrtaceae family can lose their food and habitat. Entire ecosystems can be destroyed or modified so that they no longer function.

How is it spread? Infected nursery plants and spores on infested clothing and equipment are the main means of spread.

What can be done to prevent spread? Awareness of the pathogen and adherence to hygiene procedures can minimise the spread. Decontaminants are available so if you are going bushwalking it would be a great idea to have some with you in case you see it. If you are in bushland and see plants nearby that are affected by Myrtle Rust, always clean your shoes before leaving the bush. If the area is a public reserve, report the sighting to the relevant weeds officer or field officer.

What is it? Phytophthora is a soil borne water mould which exists in soil and in plant tissue. Its taxonomic classification is an oomycete. There are more than 50 phytophthora species and of these Phyophthora cinnamomi is known to be causing widespread and severe damage.

What does it look like? The mould itself is microscopic and its presence cannot be seen in the soil, but an infected plant will exhibit wilting, yellowing and drying-out of leaves. Young feeder roots and sometimes larger roots become dark. (Phytophthora Life Cycle image courtesy Die-back Working Group).

What are its effects on plants, ecosystems? It rots the roots of infected plants so that they can no longer take up nourishment to the plant. Individual plants or entire forests can die or suffer a severe decline in health (referred to as ‘die-back’).

How is it spread? Microscopic spores spread down through the soils of sloping ground by the flow of surface and sub-surface water. Elsewhere the spores can swim through warm moist soils and be transferred via root to root contact of individual plants. During dry periods it can survive in plant tissue and re-activate when soil is again moist. Human activity is the worst agent of spread through the movement of soil, vehicles, livestock and people. Not only do these cause rapid spread but they also permit its transfer to sensitive remnant native vegetation which otherwise could have remained free of the pathogen.

What can be done to prevent spread? No one simple method can prevent spread. Awareness and knowledge of the pathogen and of sanitation practices is most important. In combination with recommended horticultural management, selective fungicides and increasing soil organic matter, the spread of the pathogen can be avoided and retarded.